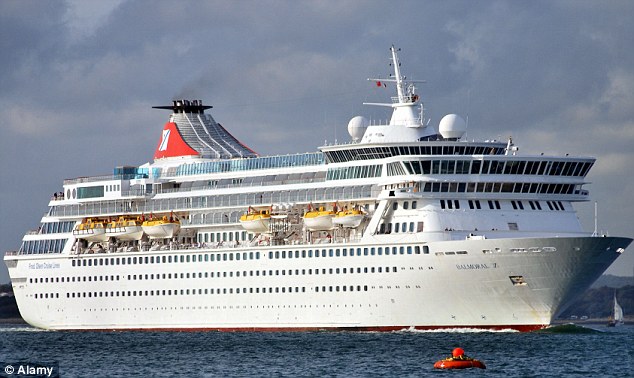 The eight-day cruise to the Norwegian Fjords was cut short after the stomach virus left hundreds of guests suffering chronic vomiting and diarrhoea.

Many had to be quarantined and confined to their cabins on the Fred Olsen line’s flagship cruise ship Balmoral. Passengers Rus and Marina Donaldson, both 55, are still feeling the effects of the bug, which they contracted on Saturday night while still on board.

Mr Donaldson, a retired civil servant from Holbury, Hampshire, said: ‘We are never going on a cruise with anyone again – even if it was a free cruise we wouldn’t stop to consider it.

‘We wouldn’t risk the possibility of repeating this experience. Even if they paid us we wouldn’t go on it.’

The couple have only eaten a slice of toast and some water biscuits since they returned home at midday on Sunday.

Mr Donaldson added: ‘Today is the first time Marina has got up since we got ill on the final night. She was actually throwing up and we both had diarrhoea the following morning.

‘We were at the height of our illness when we had to get off the ship. We had a lad help us ashore.

‘Before we became ill it had become sad and disappointing because of all the chops and changes to the itinerary. Special measures had been put in place because of the bug.’

The outbreak on board the ship – which was carrying 1,163 passengers, all paying between £799 and £1,649 per person – was so bad that the captain had to head back a day early to the docks in Southampton. The cruise firm said the Balmoral needed to be ‘systematically sanitised’ before it could set sail with passengers on its next trip, a 13-night cruise to Madeira and the Azores.

Retired engineer John Trownson, 86, who spent four-and a half ‘dreadful’ days on the liner, said ‘more than 300 people’ were afflicted by the bug.

Mr Trownson, from Penryn in Cornwall, had spent £2,200 on the trip to celebrate the 85th birthday of his partner Doris.  But within hours of boarding the ship he was struck down by the vomiting bug.

He said: ‘It was absolutely horrendous. Dreadful. I was in a terrible state. I felt it was never going to end. Hundreds of people were affected.

‘Several times a day the captain was saying more people were being infected. First we heard 75. Then it was 150. The best guess by the end was more than 300.’

He added: ‘One of the nurses who attended me said that I’d had a bad attack of the norovirus and that it would take around four days to get over it.’

And at the height of the outbreak, he said a letter to passengers from the firm’s sales and marketing director Nathan Philpot warned that they were getting to the point where the bug had ‘the potential to compromise our sanitation efforts’. Mr Trownson said: ‘That sounded like it was getting out of control. I want a full refund. I didn’t have the cruise I paid for.’

A Fred Olsen spokesman said the ‘gastroenteritis-type illness’ had affected ‘a number of the guests on board’.

It is not the first time Fred Olsen cruise passengers have been hit by gastric illnesses.

Between October 2009 and May 2010, 130 passengers fell ill on its cruise liner Boudicca, a sister ship of that involved in the latest incident. In 2014, the company paid out £280,000 compensation to those affected.

In March and April 2011, 12 passengers sailing around the Mediterreanean became ill, again on Boudicca, with some later given £10,000 payouts.

Then in 2013, the company reported an outbreak of ‘a gastroenteritis-type illness’ on Boudicca after it left Belfast for a 10-night ‘Scandinavian Cities Cruise’. In that case, 72 passengers were affected.

Fred Olsen has said all its ships meet the highest standards of health, safety and hygiene at all times.

Asked to confirm the figure of more than 300, the company said: ‘Fred Olsen Cruise Line’s policy is to not disclose the details or number of guests who have been affected by or treated for a medical illness on any of its cruises.’

The firm claimed that it is attempting to organise partial compensation for all the passengers on board the liner.

It said that holidaymakers had been offered ‘a refund representative of one day’s cost of the cruise’ as well as a voucher for up to 50 per cent off a future Norwegian Fjord cruise.

Fred Olsen says that any additional out-of-pocket expenses would be dealt with ‘on a case-by-case basis’.

The firm’s spokesman said: ‘Gastroenteritis, which is more contagious than the common cold, is spread very easily by contact with surfaces and from person to person, and is particularly prevalent during periods of cold weather.

‘Most people do not report incidences, but on a cruise ship, cases are particularly highlighted. Commonly, the illness abates within one or two days.’

They insisted their ships met ‘the highest safety, hygiene and health standards’ adding: ‘The health, safety and well-being of all our guests and crew is paramount, and we believe that our systems for preventing the spread of illness on board our ships are amongst the best within the industry.’